EFCO UK has been active on the tunnel project over the last four years, providing the best possible formwork solution with the lowest in-place concrete cost. 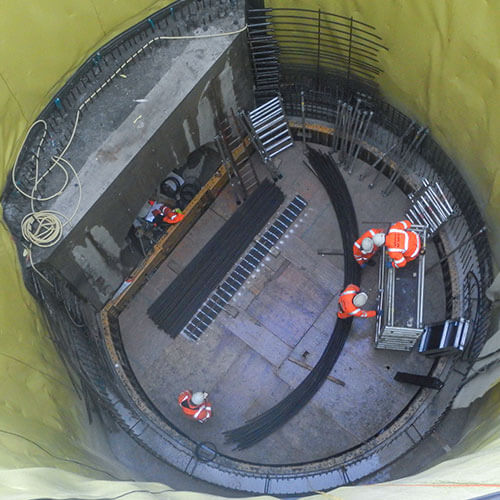 The original sewerage and stormwater management system for London was a marvel of the Victorian age and completed over 150 years ago. It was to service a population of four million Londoners at the time. By the millennium, the population of greater London had ballooned to a figure more than eight million, and the system was becoming overwhelmed, discharging 43 million tons (39 million tonnes) of storm sewerage into the river Thames each year.

The solution required a significant upgrade to the five treatment works surrounding the capital, completed by 2012, followed by the new 15 mile (25 km) long, 23′ (7 m) diameter Tideway tunnel running directly below the river Thames at a depth of up to 262′-6″ (80 m) to remain clear of the multitude of other services under the city. Started in 2016, completion is scheduled for 2024 at a projected cost of US $5.82Bn (£4.2Bn). The project involves 24 separate project sites across the city, each one connecting the new underground tunnel through deep shafts and CSO (Combined Sewerage Outflow) structures to the existing network.

Working with the main contractor joint ventures CVB (Costain, Vinci, Bachy), FLO (Ferrovial, Laing O’Rourke) and BMB (Bam, Morgan Sindall, Balfour Beatty) as well as numerous concrete sub-contractors, EFCO UK has risen to the challenge of providing engineering plans and support to construct a safe and efficient water management system to service all Londoners and drive positive change to the ecology of the river system the city lives alongside. ◊