To Have Advanced Technology

Expected to be the largest spherical building in the world, MSG Sphere at the Venetian began construction in early 2019. When finished, the structure is expected to top out at 366′ (112 m) and will reach 516′ (157 m) at its widest point on Level 6. Once the massive concrete structure has been completed, MSG Sphere will be transformed into one of the most technologically advanced buildings in the world.

After being selected to complete the one-of-a-kind structure, M.J. Dean Construction began to analyze the many different elements of the building. Designed with an expanding and contracting footprint and constantly changing floor heights, deciding on the correct formwork suppliers was important to keep up with the aggressive schedule and allow for constant adjustments on fly. EFCO’s durable high-strength, all-steel face sheet forming systems quickly became a go to for vertical concrete as the structure came out of the ground. 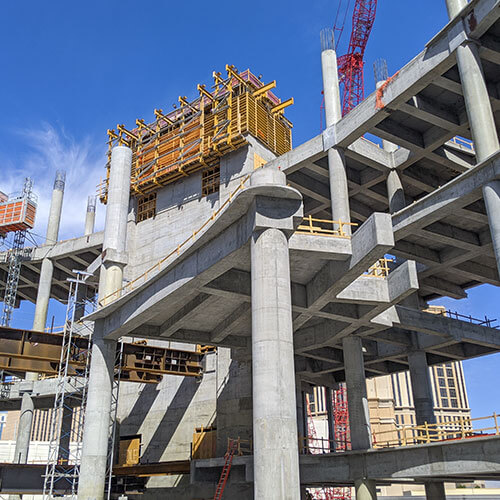 Surrounded with four 240’ (73 m) multi-cell cores, M.J. Dean decided the use of a self-climbing core form system was necessary to free up crane time and carry the placing boom. The EFCO POWER TOWER® PT-100 Hydraulic Climbing System, together with EFCO PLATE GIRDER® wall forms, proved to be the most efficient option and provided the lowest in-place concrete cost.

With the core system in design, the basement and subgrade work began on-site. Thousands of feet (meters) of 22′ (6.7 m) tall basement retaining walls were the first vertical concrete elements to be built. Bolstered with large pilasters, M.J. Dean decided EFCO’s PLATE GIRDER® and REDI-RADIUS® wall form systems would be the most efficient and safest way to handle the walls. In addition to the walls, varying width rectangular and round columns were needed. EFCO PLATE GIRDER, EFCO LITE® and Round Column® forms, many interchangeable with the walls, were again chosen to complete this portion of the vertical concrete.

Once out of the basement, vertical formwork needs only became more complicated. Utilizing the PLATE GIRDER wall forms once again, Level 1 walls reaching 40′ (12.2 m) in height were able to be formed and placed in a single pour. Column forms were cycled constantly to match the changing size and height as the building progressed. Reaching Level 3, large raker beams presented a new challenge. With anticipated form pressure of 2,000 psf (96 kPa), the decision was made to switch to EFCO HP 2400 vertical formwork. Utilizing external vibrators, the centerpiece of the stadium seating area was able to be completed safely and with a great concrete finish.

The strength and versatility of EFCO’s vertical forming systems have been validated level after level as the MSG Sphere continues its climb.