EFCO Helps To Connect Orlando To Miami Through Railway Tunnel

Brightline is constructing a high-speed inter-city railway line to bring passengers from Miami, Fort Lauderdale and West Palm Beach to Orlando. The new rail line connecting South Florida to Central Florida is expected to open in 2022. Train travel on Brightline is expected to range from 79-125 mph (125 km/h-200 km/h). Three additional stops will be added in future expansion along the South Florida Express line, including stations in Aventura, Boca Raton and Port Miami. Brightline’s new South Terminal at the Orlando International Airport (MCO) is a part of the company’s Phase 2 expansion into Central Florida, including a Tampa extension. 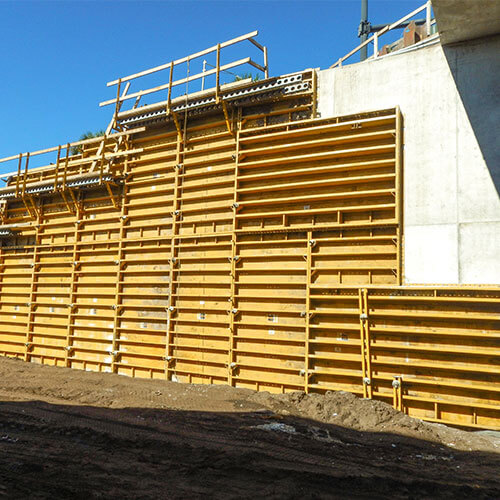 The massive infrastructure project is making progress and encompasses four zones, including the area of the Orlando International Airport and the Brightline Vehicle Maintenance Facility. This monumental endeavor, which will use 225 million pounds (100 million kilograms) of American steel, will include the laying of 490,000 ties and transporting 2.35 million tons (2.1 million tonnes) of granite and limestone by 20,000 railcars. Additionally, approximately 2 million spikes and bolts will be hammered and put in place.

The second phase of the Brightline high-speed rail project will extend the railway line from West Palm Beach to Orlando. The construction of phase two began in May 2019. Included in this phase is the construction of two concrete box tunnels.

Granite Construction Inc. was awarded a contract for the tunnel segments of the Brightline Train project due to a unique method they pitched to Michael Cegelis (Executive Vice President of Rail Infrastructure, Brightline). The innovative box-jacking method can build a tunnel for a train in the fraction of the time it would take using conventional methods, making this method safer and more economical.

Historical Accomplishment for the US Concrete Construction Industry

Minimal Disruption While The Tunneling Is Underway

When Brightline Trains embarked on jacking a precast concrete box under an Orlando roadway, it marked a historical accomplishment for the US construction industry. Brightline & Granite Construction Inc. became among one of the first companies in the nation and the first outside the northeast to use this innovative box-jacking method that enables the above infrastructure to have minimal disruption while the tunneling is underway.

Implementing An Advanced Approach To Construction

After winning the contract for this portion of the Brightline, Granite Construction approached EFCO and asked if we could precast the concrete tunnel segments on site. Team sellers John Jennings and Arif Akar assured Granite that it could be done utilizing EFCO technology such as the E-Z DECK® shoring and PLATE GIRDER® wall forms. The box-jack operation at Goldenrod Rd., just east of Orlando International Airport, took just two weeks to complete compared to traditional underpass construction, which would have shut down local roadways for nearly a year. Michael was quoted saying that, “We are constantly working with our contractors to implement the most innovative and advanced approach to construction, and Granite responded with this innovative technology that is proven in Europe, but not widely utilized in the U.S. It will reduce the period of traffic detour from many months to weeks.”

Made in the USA

The rigid all-steel PLATE GIRDER forms, manufactured in the USA, give the ability for larger ganged picks; thus, minimizing crane handling time. The large panels require minimum bracing and aligning and a reduced number of ties, eliminating rework between pours. The rugged EFCO PLATE GIRDER panel will withstand the concrete placement pressures and rough handling at the worksite.

Tunnel Systems – Quality in every detail

The 9,000+ ft² (835+ m²) of Box Tunnel Deck was poured by erecting and cycling (22) 10′ (3 m) Long x 6′ (1.8 m) Wide x 24′ (7.2 m) Tall E-Z DECK® shoring towers. The versatile E-Z DECK complete deck system incorporates the E-BEAM®, Z-BEAM® and the E-Z SHORE®. These components have been designed and engineered to move together in large modular units. With the large capacity of the E-Z SHORE Post, EFCO can reduce both the number of shore posts and associated stringers. Z-BEAM and E-BEAM can both extend beyond the rectangular four-corner post setup by just varying the lengths of the Z-BEAM and E-BEAM. ◊