J. D. Abrams, L.P. of Austin, Texas is working on a complex I-35 interchange expansion on one of the most congested stretches of interstate in the entire country, with more than 175,000 cars traveling on the roads every day. The sheer volume of traffic congestion, along with the geometry of the columns and caps, required unique forming solutions and a strong collaboration between EFCO and J. D. Abrams. Once completed, this project will relieve traffic congestion by adding three new direct connectors and reconfiguring an existing entrance ramp into a more efficient braided ramp. 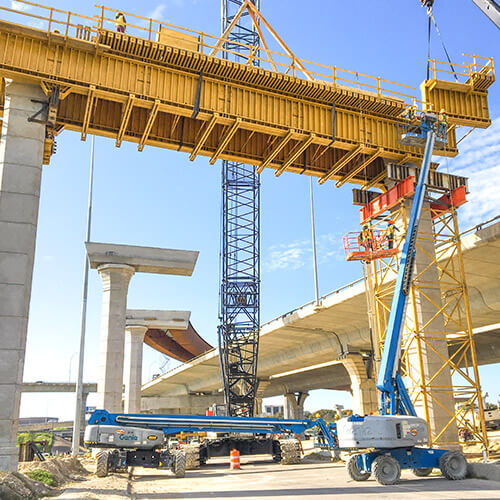 The geometry of the columns on this project, specifically the large columns which are octagon-shaped with a flared column capital at the top, posed two different issues: first, EFCO had to design stripping relief into the forms to get the capital forms stripped. Second, EFCO had to design and build oversized SB-4 Support Brackets that could reach out beyond the capital to the soffit beams. Each oversized SB-4 Support Bracket measures 6′ (1.6 m) tall and weighs 1,000 lb (450 kg)!

The caps on this project also posed a unique challenge because they were narrower than the top of the column capital. Since there was no way to carry cap loads through the cap side forms and support them on the top of capital, EFCO designed a spanning beam set-up using face-to-face PLATE GIRDERS®, Tension/Compression forms and SUPER STUDS®. This design allowed J. D. Abrams to span long distances while also maintaining minimum roadway clearances for passing traffic below.

Due to traffic congestion, most of the caps on this project had to be constructed, poured and cycled at night, during nightly road closures. Formwork had to be designed such that it could carry concrete loads and form the concrete but also be stripped efficiently during an 8-hour road closure (5-hour actual work window once the cranes are mobilized into work area). In some cases, EFCO had to design a system that would allow the contractor to hang large sections of soffit forms from the top of the recently poured cap using SUPER STUDS and all-thread because stripping the entire soffit was not possible during a single nightly closure.

Single-column caps on this project often extended out over live traffic where shore towers were not possible to support the unbalanced load. In order to pour the caps while maintaining traffic flow, EFCO designed a balanced soffit that was, supported on column-mounted brackets and a 100K (444 kN) shore tower on the skinny side of the cap. The contractor then preloaded the 100K (444 kN) shore tower with precast concrete blocks equal to the weight of the unbalanced load plus a 1.5:1 factor of safety on the overturning moment. ◊

This is a challenging project, not only because of the overall size and complexity of the structures, but also because of the limited work access in the highly congested I-35 corridor. EFCO worked with our engineers and superintendents to design column and cap forms that worked within each location’s constraints and our equipment’s restrictions. These efficient designs allowed us to form and strip within the limited work areas with minimum lane closures.