In the heart of the Lake District, an area of outstanding natural beauty in the North East of England, lies the small village of Pooley Bridge on the southern end of Ullswater. It takes its name from the bridge over the River Eamont. Until the arrival of Storm Desmond in December 2015, the village was served by this historic bridge originally built in 1764. When the water from the storm subsided, the bridge was lost and the process to design and build a suitable replacement had begun. 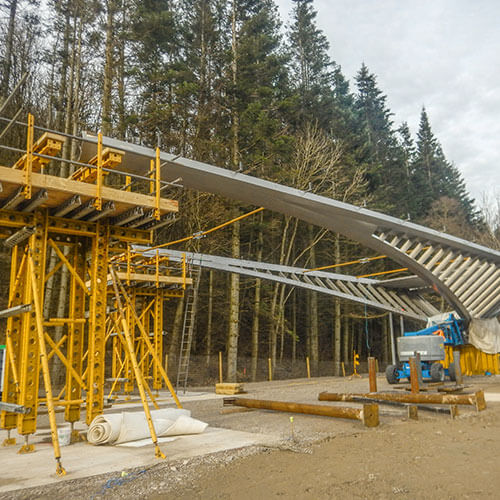 The winning design was a prefabricated 495 ton (450 Tonne) architectural stainless steel and concrete, two-lane road bridge with a 132′ (40 m) clear span that would form the US$ 6.2m (£ 5m) cornerstone of the local council’s program to recover from the storms.

EFCO UK was approached by Betts Construction to provide solutions for the cast-in-place abutments, support to the steel structure during erection, and falsework support to the complex lower concrete arch prior to the completed structure being lifted into its final position. Using a combination of HAND-E-FORM®, SUPER STUD®, PLATE GIRDER® and E-Z DECK® systems, EFCO UK was able to respond to the challenge of this unique project.

The UK team is very proud to have been involved in this landmark structure and hope it is enjoyed by hikers and holidaymakers for another 250 years, or more.

Having decided to move away from the original contract of forming and casting the deck whilst suspended over the river, and once Betts became involved, we put forward the forming of the lower arch deck by precasting in the adjacent existing car park area. We pushed our proposals forward with the confidence that EFCO’s equipment and level of design support would overcome any obstacles, as we moved forward into the detailed support and formwork design requirements.

Indeed, such was the proactive and technical level of support that was required to react and resolve the numerous eccentric loadings that needed to be catered to for this unusual stainless steel box section framework, that Betts’ and EFCO’s expertise was extended to cover the support and stability of the frame in addition to the original concrete requirements for the deck structure, as well as the abutments, which were formed within cofferdams using EFCO HAND-E-FORM system.

The Lower Arch Deck was erected within a shortened time period and has now been stripped satisfactorily. It is ready for the main contractor to lift and crane the deck into place over the river.

The level of EFCO’s support, equipment service and technical support was never in doubt, throughout our company, with major wall formwork and deck support systems continuing smoothly for some time now on our Caernarfon and Warrington bypass schemes.