State Highway 146 is the main roadway along Trinity Bay providing a vital connection between Galveston and Houston. It serves as a hurricane evacuation route and provides access for commuters and cargo freight along Trinity bay. Growth in the area has increased traffic over the years, which necessitated an expansion of the roadway. In 2016, TxDot began moving forward with right-of-way acquisitions, and in 2019, Webber LLC. began work on this $200 million project. 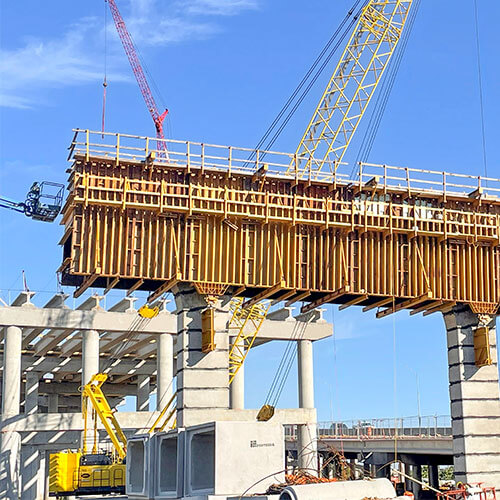 Webber worked with EFCO to design multiple formwork systems to tackle the different parts of their job. On the Main Bridge and the Express Bridge over Clear Creek, Webber utilized multiple sizes of standard Round Column® formwork [66″, 54″, and 36″ (1,675 mm, 1,372 mm, and 915 mm)] to form the columns and a self-supporting hinged soffit formwork system to handle the tie beams and square caps.

On the Express Bridge over land, Webber elected to use EFCO’s PLATE GIRDER® formwork for the large flare columns 4′ x 6′-6″ x 44′ (1.2 m x 2.0 m x 13.4 m) tall], which incorporated custom made radial soffit panels. They also used a self-supporting, steel soffit solution for their inverted T-shaped pier caps. The steel-face PLATE GIRDER system enabled Webber to use the same forms throughout the project and gave them the ability to handle the large cantilever on some of the caps without the use of a shore tower or additional support providing Webber LLC labor and material savings. ◊

Our Spring Sale Has Started

You can see how this popup was set up in our step-by-step guide: https://wppopupmaker.com/guides/auto-opening-announcement-popups/

Our Spring Sale Has Started

You can see how this popup was set up in our step-by-step guide: https://wppopupmaker.com/guides/auto-opening-announcement-popups/